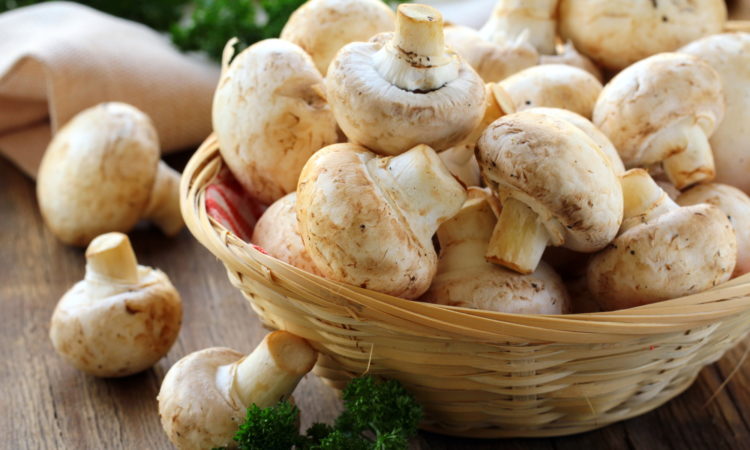 You might remember from high school biology classes that Earth has two “kingdoms” of life: plants and animals.

Actually, though, there’s another one, which we don’t think about much, but should. (And here I am still ignoring bacteria and algae.)

Asian systems of medicine have used mushrooms for thousands of years. In many countries, mushrooms are common, popular food.

In the US, we tend to ignore them – to our detriment.

Some people actually let mushrooms gross them out.

Many of us are scared of eating a poisonous species. That’s a legitimate fear, because some kinds can kill you. If you can’t tell one from another, don’t pick them wild.

Fortunately, you don’t need to leave your local supermarket. The plain white button mushrooms you buy there give you many health benefits (though you should take one simple precaution).

Pizza doesn’t count as a healthy food, but adding a topping of mushrooms does make it less unhealthy.

Fungi are a biological kingdom going back nearly to the beginnings of life billions of years ago.

The mushrooms we see aboveground are called the fruiting body. They consist of the stem and the cap.

Below the ground, the mycelium act as roots – intercommunicating systems that help rebuild soil.

Fungi are incredibly hardy. They live on the International Space Station, in Antarctica, and inside nuclear reactors.

One major component of mushrooms is beta-glucans – with proven immune-boosting and anti-viral benefits.

Beta-glucans are a group of polysaccharides found in the cell walls of the seaweed, whole grains, and fungi.

Because their cell walls are made up primarily of beta-glucans, mushrooms are particularly rich in beta-glucans.

Once inside us, beta-glucans bind to receptors on many different kinds of cells in our immune system. That activates them, so they work better.

Best of all, beta-glucans activate both branches of your immune system:

Innate immunity – your first line of defense against any invading bacteria and viruses.

Studies in animals demonstrate beta-glucans can help slow or even reverse immunosenescence. That’s the tendency of immune systems to weaken and deteriorate as we grow older.

In mice, consuming beta-glucans actually had a rejuvenating effect on the elderly.

In one study, eating shiitake mushrooms daily improved immune system function in young adults. For four weeks, they ate the dried equivalent of 5 to 10 fresh mushrooms every day.

This resulted in an increased number of gamma delta T lymphocytes – and the doubling of their natural killer cells.

Bacteria that cause disease can produce poisonous compounds – called endotoxins – that make you feel sick. Endotoxins are stressful, producing harmful levels of inflammation.

The concept of an adaptogen comes from the search by the Soviet military for compounds for soldiers that would improve their performance without the let-down and physical damage of amphetamines. (Much of World War II was fought by soldiers on speed: Germans, British, Japanese, and Americans.)

True adaptogens are non-habit forming, restore balance to the body, and are nonspecific. That means they don’t do just one thing to one part of your body but are healthy for large parts of your biology.

Therefore, adaptogens strengthen your body and give you resilience against stress.

That’s what research shows mushrooms are also great at restoring a healthy balance to your entire body.

These are the plain mushrooms you see at the supermarket.

Overall, they are good for you. However, unfortunately, they do contain agaritine, which may cause cancer.

Fortunately, agaritine is easily destroyed by cooking the mushrooms: boiling, microwaving, frying and canning them.

Therefore, it’s safe to eat mushrooms from a can or added into food you cook, but don’t consume them raw.

When you boil mushrooms, the agaritine goes into the water, so throw that out.

Microwaving mushrooms is most effective. One minute reduces agaritine content by 65%.

Nobody has pinned the cancer risk of agaritine down to a certainty because the data has been extrapolated from mouse studies. It’s likely not an issue for most people, who eat few to none raw mushrooms.

If you’re a mushroom lover eating lots of them per day, do take the time to microwave and/or boil them to reduce your risk.

They’re made up of chitin, just as lobster shells are, which we don’t have the enzymes to digest.

* Buy white buttons at the supermarket. Buy canned instead of raw so you don’t have to bother with cooking them. Add them to your meals.

* Buy supplements so you get dried mushrooms that aren’t commonly available as food: shiitake, maitake, reishi, Chaga and others. (They have more powerful antioxidant content than supermarket mushrooms.)

NOTE 1: Despite many online claims and their historical use in medicine, so far, mushrooms have NOT – yet, anyway – produced any cures against specific diseases. (Hopefully, research is continuing.)

Therefore, avoid anybody who makes specific medical claims. However, because they are proven adaptogens and immune boosters, they do help us to better cope with this stressful world.